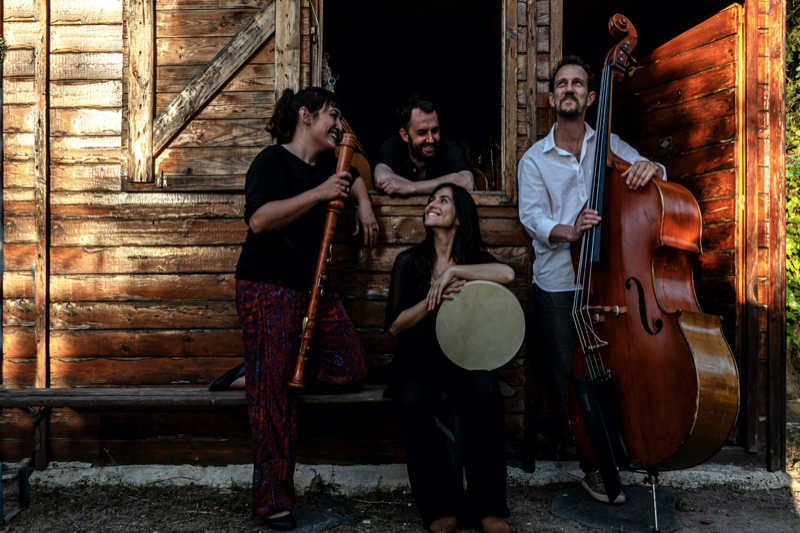 Taracea creates bridges between the past and the present. The Madrid-based trio’s artistic project is to play early european music with a contemporary focus that includes jazz and folk elements and lots of improvisation.  According to the group, “Desvíos a Santiago” is a pilgrimage that begins in Central Europe, crosses France, stops in Montserrat and culminates in the capital of Galicia (in the northwest of Spain). The traditional repertoire of the pilgrims, which traveled throughout Europe, was sung in several languages and recreated with a multitude of variations.

Taracea was founded in 2018 by Rainer Seiferth, a multifaceted German guitar and early plucked instruments player who lives in Spain. Belén Nieto is a flute and recorder specialist and a regular member of Jordi Savall’s ensembles. The double bass player Miguel Rodrigáñez is at home in jazz, flamenco and classical music.

TARACEA’s repertoire comes from Renaissance and Baroque Europe. Their first album (AKOÉ, Alpha Classics 2020), received with excellent reviews, is composed of adaptations of dances, songs and madrigals that leave plenty of room for improvisation and interaction among the musicians. This is precisely the hallmark of this group of musicians in which multiple traditions and a quiet and vigorous innovative drive converge. They invited to collaborate outstanding international musicians: the french serpent virtuoso Michel Godard who is one of the pioneers in the fusion of old and new sounds, the young  Spanish folk singer and percussionist Isabel Martín and the Spanish percussionist David Mayoral, a well – known collaborator in many European early music projects.