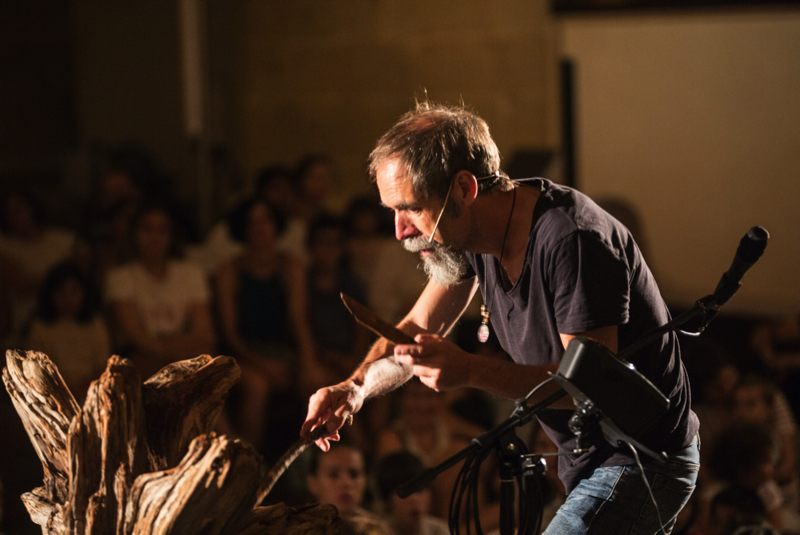 The Neønymus project by Silverius de Ura began to develop in 2010. He was researching, studying lyrical singing and composition the first two years and after that, he has been giving concerts and lectures.

“Invented history of invented music” is a didactic concert focused on a child audience but it is  also recommended for teenagers and adults. It is an imaginary review of the history of music from prehistoric times to the present day, where the audience will participate by singing, doing body percussion, creating music with unsuspected objects, learning to build unusual instruments, etc. and above all witnessing astonished how songs are built through rhythm and fantasy, spun by stories that capture their attention. A very innovative proposal that brings people closer to music and which they will be talking about for days.

Silverius de Ura has offered concerts in Russia, France, Italy, Portugal and innumerable places in Spain. Since 2013, Neonymus has offered more than 600 concerts in very different spaces. You can take a look at this video-summary of one of the 269 didactic concerts; specifically in a theater in Madrid because their proposal has been selected by several City Councils receiving wonderful reviews from both students and teachers.

Neønymus’ music creates a new musical language and takes vocal polyphony to a new and peculiar register. His daring combination of technology and singing achieves surprising results. Very interested in the human brain and the response to certain harmonies, he combines this with his passion for the origin of man and his personal quest.

In addition, the artist Silberius de Ura has composed BSO for films, series, short films and plays and dance. He has recorded seven albums. His album entitled Ø was number 1 in sales on Amazon.es and iTunes World Music. He was with RNE (El ojo crítico) in the Inauguration of the new National Archaeological Museum (Madrid) and in Iñaki Gabilondo’s program “Cuando yo no esté”. Iker Jiménez dedicated a Milenio3 program to him on Cadena Ser, and a year later he performed live on the popular television program Cuarto Milenio (Cuatro). He has given lectures on music, the human brain and emotions, at the Museum of Human Evolution, and in the area of Anthropology at the University of Extremadura. He has given concerts in Russia, France, Italy, Portugal and many places in Spain.